Great Is Your Faithfulness 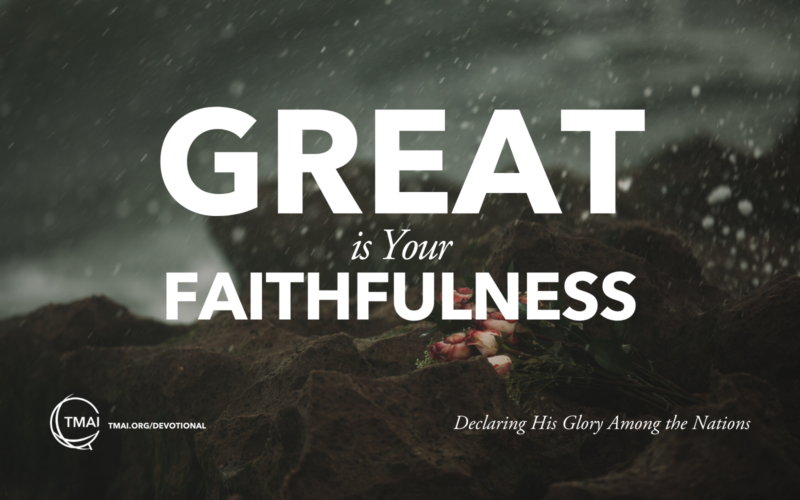 The Lord’s lovingkindnesses indeed never cease, for His compassions never fail. They are new every morning; great is Your faithfulness.

Jeremiah was heartbroken over the tragedy of his nation and city, Jerusalem. His soul was shattered even though he understood why thousands of his countrymen were killed, deported, and enslaved. Israel’s many transgressions caused her tragedy. Now the nation bitterly wept, her priests groaned, and many were humiliated and homeless. Israel’s enemies were now her masters. The prophet’s agony forced him to cry out to God. He had lamented, “Oh that my head were waters and my eyes a fountain of tears, that I might weep day and night for the slain of the daughter of my people!” (Jer. 9:1). Many lives are destroyed from personal sin and national unbelief. He knew that the only solution for Israel was repentance, a return to her covenant God in faith and a rejection of her idols. Jeremiah’s prayer demonstrates hope. Every morning he arose asking God to reverse the nation’s tragedy knowing that “His compassions never fail.” His confidence was in God’s character. Though God is just to punish, His compassions never fail and one day He will redeem His people with His never-failing lovingkindness. My country, Croatia, suffers from the influences of godless communism, as well as the false gospel of Catholicism. Many lives are destroyed from personal sin and national unbelief. But this is true in every nation. As Christians, we must remember God’s character and agonize before Him in prayer, that He would make many spiritual slaves free. We should pray every morning that God might use us to brighten the gloomy existence of our fellow citizens through the gospel. May He reveal His lovingkindness, compassion, and faithfulness so that the lost might worship Him and find, in Christ, true comfort and joy.