The Church in God’s Plan 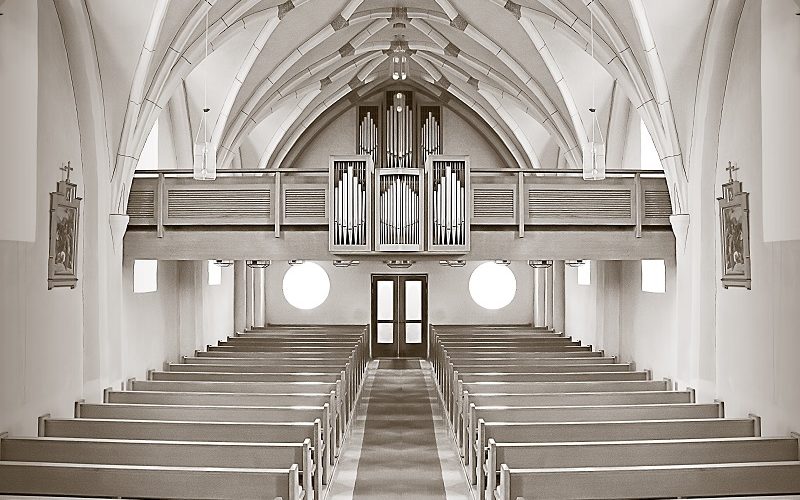 In our last post, we looked at the fact that the church is a divinely-ordained institution. Today, I’d like to consider a second reason why I love the church:

2. The Church Is the Outworking of an Eternal Plan

In Titus 1:2, the apostle Paul writes of the “eternal life which God, who cannot lie, promised before time began.” In this context, the apostle Paul was describing his ministry, a ministry of evangelism and salvation “for the faith of those chosen of God”—namely, the church (v. 1).

In other words, in eternity past, before anything was created — before time began — God determined to begin and to finish His redemptive plan. People were chosen. Their names were written down that they might be brought to faith, to godliness, and to glory. God “promised” this before time began.

To whom did God make the promise? This was before time, and therefore before creation. So there weren’t any people or other creatures around. To whom, then, did God make this promise?

We find the answer in 2 Timothy 1:9. There we read that God “saved us and called us with a holy calling, not according to our works, but according to His own purpose and grace which was given to us in Christ Jesus before time began.” That verse ends with the same phrase we find in Titus 1:2: “before time began.” And here the apostle says God’s eternal purpose — this same promise that was made before the beginning of time — “was given to us in Christ Jesus.” The eternal pledge of our salvation, the divine covenant of redemption, involved a promise made by the Father to the Son before time began.

This is a staggering reality. In the mystery of the Trinity we see that there is an ineffable and eternal love between the Members of the Trinity. Jesus refers to it in His high priestly prayer: “Father, I desire that they also, whom You have given Me, be with Me where I am, so that they may see My glory which You have given Me, for You loved Me before the foundation of the world” (John 17:24, emphasis added).

That love must find an expression. True love always seeks ways to give. And in a demonstration of His perfect love for His Son, the Father made a pledge to the Son. And what was that pledge? He promised the Son a redeemed people — justified, sanctified, and glorified. He promised to bring the redeemed to ones to glory, that they might dwell in the very place where Father and Son have dwelt since before time began — the very realm of God. And this collective body of called-out ones — a people for His name (Acts 15:14) from every tribe and people and tongue and nation (Rev. 13:7) — would form a living temple for the Holy Spirit (Eph. 2:21-22), becoming the very dwelling-place of God.

That is the eternal promise the Father made to the Son. Why? As an expression of His love. The redeemed of humanity, then, are a gift from the Father to the Son.

With that in mind, consider Jesus’ words in John 6:37: “All that the Father gives Me will come to Me, and the one who comes to Me I will certainly not cast out.” That, again, affirms the utter invincibility of the church. Every individual ever redeemed — everyone ever given the gift of faith, forgiven, and justified before God by grace — is a love-gift from the Father to the Son. And not one of them will fail or be cast out. Would Christ turn down a love-gift from His own Father?

Furthermore, the importance of the doctrine of election emerges from all this. The redeemed are chosen and given to the Son by the Father as a gift. If you are a believer, it is not because you are more clever than your unbelieving neighbors. You did not come to faith through your own ingenuity. You were drawn to Christ by God the Father (John 6:44, 65). And every individual who comes to faith is drawn by God and given as a love gift from the Father to the Son, as part of a redeemed people — the church — promised to the Son before time began.

The full significance of God’s eternal purpose becomes clear as it is unfolded to us in the book of Revelation. There we get a glimpse into heaven, and what do you suppose the triumphant church is doing there? What occupies the glorified saints throughout eternity? They worship and glorify the Lamb, praising Him and serving Him — and even reigning with Him (Rev. 22:3-5). The collective body is pictured as His bride, pure and spotless and clothed in fine linen (19:7-8). They dwell with him eternally where there is no night, no tears, no sorrow, and no pain (21:4). And they glorify and serve the Lamb forever. That is the fullness of God’s purpose; that is the reason the church is His gift to His Son.

Now this eternal promise involved a reciprocal promise from the Son to the Father. Redemption was by no means the Father’s work alone. In order to accomplish the divine plan, the Son would have to go into the world as a member of the human race and pay the penalty for sin. And the Son submitted completely to the Father’s will. That is what Jesus meant in John 6:38–39: “I have come down from heaven, not to do My own will, but the will of Him who sent Me. This is the will of Him who sent Me, that of all that He has given Me I lose nothing, but raise it up on the last day.”

Redemption from sin could not be purchased by animal sacrifices or any other means. Therefore the Son came to earth for the express purpose of dying for sin. His sacrifice on the cross was an act of submission to the Father’s will. Hebrews 10:4–9 makes this very point:

All of this means that the church is something so monumental, so vast, so transcendent, that our poor minds can scarcely begin to appreciate its significance in the eternal plan of God. The ultimate aim of God’s plan is not merely to get us to heaven. But the drama of our salvation has an even grander purpose: it is an expression of eternal love within the Trinity. We’re only the gift.

There’s one thing more worth noting about the Father’s eternal plan with regard to the church. Romans 8:29 says that those whom the Father chose to give to the Son He also predestined them to be conformed to the Son’s image. Not only would He would justify them, sanctify them, glorify them, and bring them to heaven so that forever and ever and ever they could say, “Worthy is the Lamb”—but He also determined that they would be made like the Son. This is “so that He would be the firstborn [prototokos] among many brethren” (Rom. 8:29). Prototokos refers not to someone born first in a chronology, but the premier one of a class. In other words, Christ is the supreme one over a whole brotherhood of people who are like Him.

Our glorification will instantly transform us into Christlikeness. John wrote, “When He appears, we will be like Him, because we will see Him just as He is” (1 John 3:2). Paul told the Galatians, “I am . . . in labor until Christ is formed in you” (Gal. 4:19). We’re being conformed to Christ’s image. And the good news is that this goal will be achieved. The church will emerge from all her trials triumphant, glorious, spotlessly arrayed to meet her Bridegroom.

How can we not rejoice in the prospect of that? How can Christians possibly be apathetic about the church? The church is ultimately invincible. The purposes of God cannot be thwarted.

There is a fascinating conclusion to all this. Paul describes it in 1 Corinthians 15:24-28:

Then comes the end, when He hands over the kingdom to the God and Father, when He has abolished all rule and all authority and power. For He must reign until He has put all His enemies under His feet. The last enemy that will be abolished is death. For He has put all things in subjection under His feet. But when He says, “All things are put in subjection,” it is evident that He is excepted who put all things in subjection to Him. When all things are subjected to Him, then the Son Himself also will be subjected to the One who subjected all things to Him, so that God may be all in all.

Picture the scene. All Christ’s enemies are destroyed and defeated. All things are placed in subjection to the Son. The Father has given Him the great love-gift, the church, to be his bride and to be subject to Him. Christ is on the throne. All things are now subject to Him — except the Father, who put all things in subjection to His Son. “Then the Son Himself also will be subjected to the One who subjected all things to Him, so that God may be all in all” (v. 28).

In other words, when the Son brings the church to glory and the Father gives them to the Son as His eternal love gift, then the Son will turn around and give everything, including Himself, back to the Father.

This is a mind-boggling look at our future. This is God’s plan for the church. We are a people called out for His name, redeemed, conformed to His Son’s image, made to be an immense, incomprehensible, all-surpassing expression of love between the Persons of the Trinity. The church is the gift that is exchanged. This is God’s eternal plan for the church. We ought to be profoundly grateful, and eager, and thrilled to be a part of it.