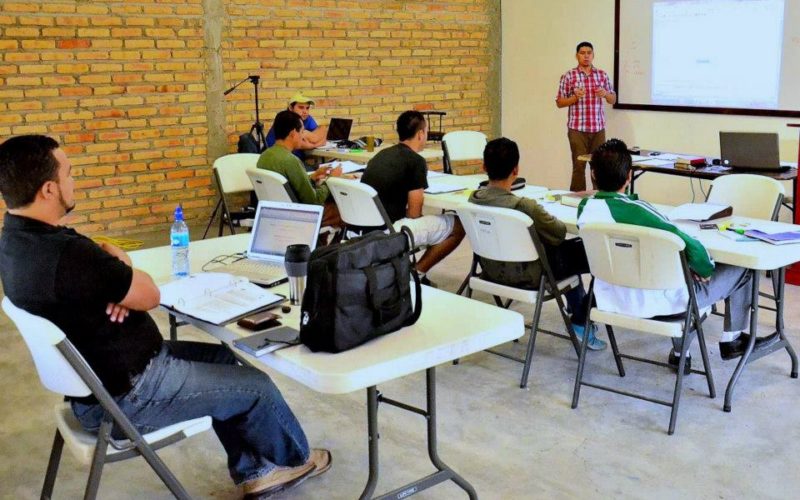 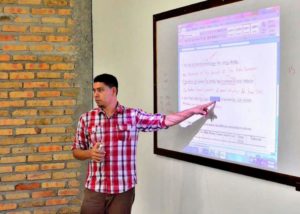 Pastor Edwin Zelaya testifies to God’s grace after God opened his eyes to the gospel and rescued him from a deep hatred that gripped his soul.

“I grew up in a broken family,” explains Edwin. “My dad left us when my mom was pregnant with me, and my early life was painful. I remember visiting my grandparents one day and my biological father happened to be there. I didn’t know who he was, so I said, ‘Good afternoon, sir.’ He was short with me and said, ‘No, you need to call me Dad.’ I had never seen him before so I said, ‘I don’t know you,’ and he grabbed a shoe and hit me. That was my first impression of my dad.”

“I had learned to hate my dad more and more since the day he hit me. I remember wishing that terrible things would happen to him, but by God’s grace He led me to forgive my dad…”

Edwin’s mother re-married when he was ten, and his stepfather began taking them to church. After a few years he realized that he was a sinner and needed to respond in repentance and faith. He recalls the pain he struggled to overcome in those years. “I had learned to hate my dad more and more since the day he hit me. I remember wishing that terrible things would happen to him, but by God’s grace He led me to forgive my dad. It was when I grew in my understanding of God’s love and mercy toward me that I had the sincere desire to repent of my own hatred toward my dad and to extend forgiveness to him.” Today Edwin and his biological father have a very close and loving relationship, which serves as a continual testimony to the power and grace of God. And his constant prayer is that God would save his father.

Pastor Edwin Zelaya also praises God for equipping him for good works and faithful ministry. “After God helped me to extend kindness to my father, I developed an increasing desire to minister God’s word to others lost in sin and desperate for hope. At the same time a new ministry in Honduras had begun, offering conferences on various biblical and theological topics. This ministry was MEDA. I started attending as many conferences as possible with my stepfather. Eventually, MEDA began a new program, called ‘The Preacher’s School,’ which included serious studies in Spanish grammar, hermeneutics, homiletics, and basic Greek grammar.”

Edwin enrolled in this “preacher’s school,” which would soon develop into the four-year seminary thread of MEDA (Ministerios Evangélicos de las Américas), a TMAI training center based in Honduras. “At first it was a massive shock to my theological system,” he remembers. “I had picked up many things from the church scene in Honduras, but had not studied the Bible much for myself. I thought I had reached a high level of spirituality, speaking in tongues and expressing various Charismatic emphases in showy and colorful ways, but God began teaching me in His word that these things were not a true mark of spirituality, and were in fact largely false. As you can imagine, at first I resisted, but God’s word overpowered me. I began to grow in humility before an awesome God, and He instructed me by His word into an increasingly rich understanding of Christ my Savior. My experience at MEDA’s seminary revolutionized my understanding of God and deepened my appreciation for the gospel in ways I never could have realized before.” 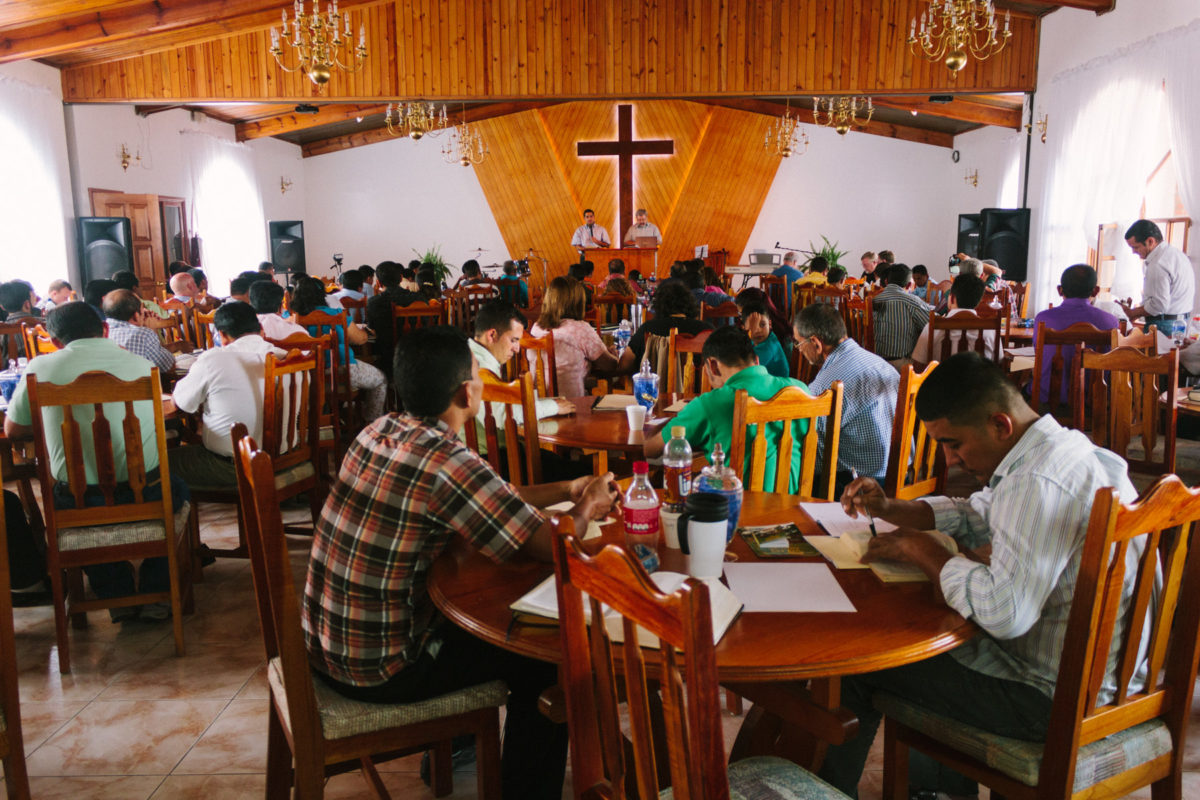 Pastor Edwin Zelaya now petitions on behalf of MEDA for supplications and support so that the training might go on.

“I’ve been working full-time since 2009 as a pastor at Iglesia Bautista Betania and also teaching Greek at MEDA’s seminary. This was always the emphasis in our training. We need to be faithful stewards of what God has given us and reproduce ourselves so that the gospel ministry might go on to the ends of the earth. I have students from El Salvador, Nicaragua, and other places, and each man represents the health of the church he’s serving. Many people say, ‘My pastor is different, and I can tell he’s been given real food at your seminary. It’s benefitting us, and we love it!’”

“Our classrooms, however, are not ideal for teaching,” Edwin explains. “We’re still using MEDA’s dining hall, where we can hear the people working in the kitchen, using the restrooms, and coming in for coffee breaks. It’s a challenge for men to maintain their focus and have intimate discussions about matters of the ministry. We are doing much in the churches here in Honduras to teach the saints the need to support training ministries, and they are starting to get it, but it takes time and serious investment to make real and lasting change.” 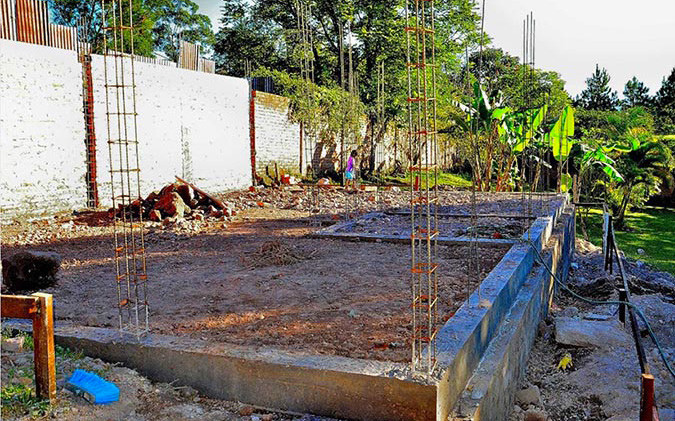 Last July, MEDA was able to break ground for a new classroom facility that will accommodate four classes. The work continues as donations come in. We praise God that since the needs have been made known, already one donor has gifted MEDA with $16,000 toward the continuous development of these much-needed classrooms. This donor would like to challenge others to match his gift by raising another $16,000.

We believe, together with Pastor Edwin Zelaya, that there is mighty work afoot in Central America. As he explains, “There are men who are engaging and diligently studying God’s word here for the first time. It is changing our people and culture and cities through individual believers with regenerated hearts who seek to obey all that Christ commands. For me it is especially wonderful to see Christ-centered families, which is powerful to eliminate so many problems that affect Hondurans, such as children being abandoned and women being abused. We know the problem is the condition of sin, not poverty or crime, and so with Christ’s gospel we move forward.”

Post Category
Honduras
< Prev Post “Our TMAI Story”, by pastor Fred Perry
Berlin: EBTC Flourishes in the Life and Landscape of the Local Church > Next Post