“In Malawi, We Don’t Have Mentors”

By Dave Temple (pictured above), TMAI professor in Malawi.

I was standing with Ernest, a Master of Divinity student at Central African Preaching Academy (CAPA), at his ramshackle workshop where he operates his welding trade. The workshop consists of scrap metal made into a workbench and an improvised shade tent of old cardboard. The ground is littered with sharp debris that promises to puncture a tire or perhaps a foot, and there are grungy baby chicks pecking through grey water looking for any choice pickings. It may not be much to look at, but Ernest operates from here because there’s a constant power supply. That’s more than can be said for most parts of town, where extended blackouts are the norm.

As he was “ironing out” an iteration of my roof rack, Ernest turned to me and said, “I’ve been working on that assignment you gave us, and I can’t think of one person who can mentor me!”

I’d been teaching a pastoral ministries course, and our current topic was raising up and training elders in the church. I’d assigned them the task of developing an outline of topics and material they would deem important for pouring into the men of their church. I included some basic questions like:

As you can tell from my questions, I’m simply getting them to think in this direction so they can practically fulfill 2 Timothy 2:2 in their context!

It dawned on me: These pastors pursuing their Master of Divinity degree must mature to be the first generation that willingly provides that voice of discipleship, discernment, and leadership to the next generation. They will have to be the first to give out what they have never received—at least, until now.

It was in response to this last question that Ernest told me, “In Malawi we don’t share like this. I have no one I can go to for this kind of help; we don’t have mentors.” As he spoke, I realized that this simple question was truly vexing him. He grasped the need for a mentor, yet he was dismayed by the bleakness of his prospects. And he relayed it to me less from the sense of “So give me a pass on that question” and more from the sense of “I’m distraught that something so basic is absent from our churches.”

It was a brief comment on his part, but it possessed tremendous gravity for me. My mind reeled as I attempted to take in such basic information. Initially, I interpreted the comment as a plea for me to disciple him. But as he explained, I realized that this wasn’t an isolated case; the lack of disciple-makers is pandemic here. It dawned on me: These pastors pursuing their Master of Divinity degree must mature to be the first generation that willingly provides that voice of discipleship, discernment, and leadership to the next generation. They will have to be the first to give out what they have never received—at least, until now.

I am a relative newbie to Malawi, and I still take many things for granted. But that brief conversation opened up worlds to me. I realized the massive void that needs to be filled—as well as the glorious reality that Christ is building His church in Malawi. The conversation underscored how important it is for our CAPA team to operate here. While church buildings are ubiquitous, Christianity 101 is scarcely taking place.

We covet your prayers for the 21 men presently enrolled in the M. Div. program, that God would sustain them through the rigorous demands of seminary. This is by far the hardest they have ever been pushed intellectually and academically, as well as in managing their time to balance the demands we’re putting on them. Pray for CAPA’s staff, that we would be excellent teachers and that we would make an impact as we disciple our students. We are aware of our limitations and the need for God to strengthen our hands for this eternity-impacting work. Thanks for your partnership and your prayers.

Laboring in the Warm Heart of Africa,

Dave wrote that update nearly three years ago. Today, he’s still ministering faithfully in Malawi—as is Ernest, who earned his Master of Divinity degree in 2018. Ernest is indeed part of the “first generation” Dave mentioned; he’s now teaching Greek at CAPA and helping give leadership to a new generation of Malawian pastors. That’s certainly an answer to Dave’s prayers, as well as the prayers of friends like you. Praise the Lord for what He’s doing in Malawi! And please do pray for CAPA’s faculty and students. Who knows what the Lord may yet accomplish through them in Malawi. 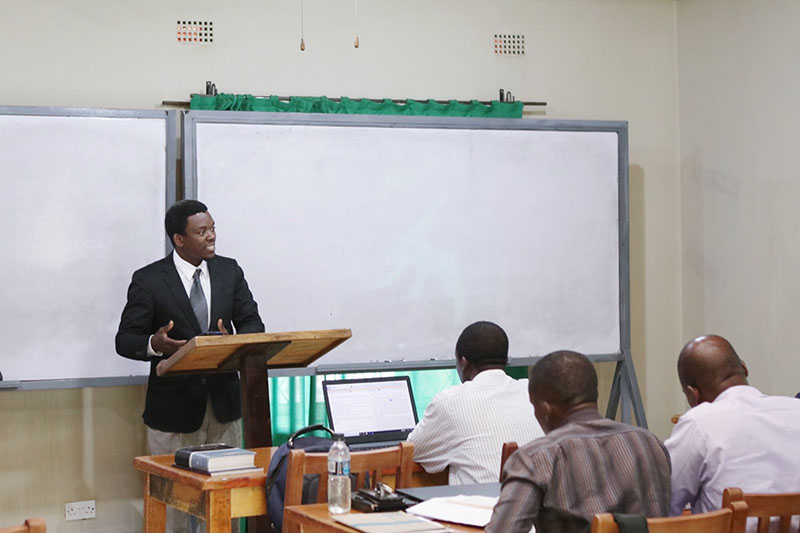