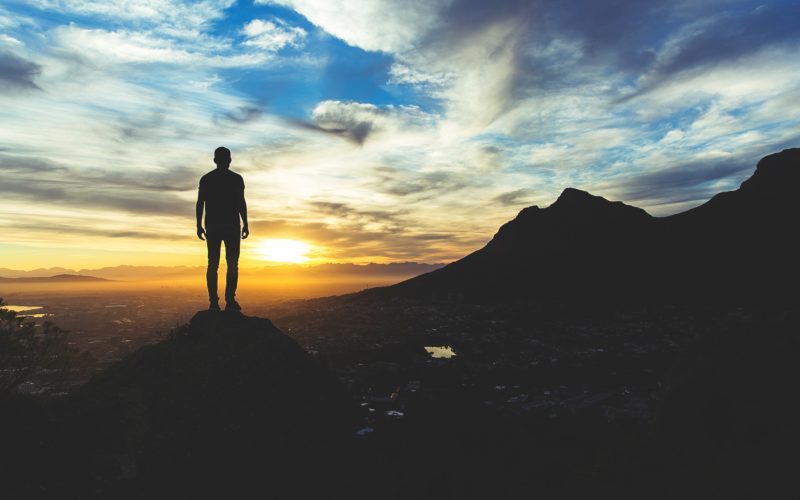 On June 12, 1944, just six days after D-Day in World War II, a young lieutenant named Richard Winters led his men to the outskirts of Carentan. As the officer in charge of Easy Company, of the 101st Airborne, he was tasked to clear the large French town of its German defenders. It would be a small battle, but it played a significant role in the massive effort to rid the world of Adolf Hitler and the Nazis.

As Winters led his company up the road toward town, the company started taking machine gun fire from a German MG42. The men instinctively dived for cover into ditches on either side of the road, and stayed there—they froze. Not only was the success of the mission in jeopardy, but the men were easy targets for enemy machine gun and sniper fire.

What happened next proved to be the turning point in the battle for Carentan—it’s the stuff legends are made of. Lt. Winters went into the middle of the road and, with bullets hissing past him, started yelling at his troops to get up out of the ditches and engage the enemy. His words, coupled with his heroic action, motivated the men to get up, get in the fight, and gain a decisive victory over the Germans.

Winters’ disregard for personal safety in his effort to save his men from certain death didn’t just earn him a medal; his actions earned him the love, respect, and admiration of his men. They followed him faithfully from Carentan, through the nightmarish Battle of the Bulge, and on to triumph at Hitler’s Eagle’s Nest.

Soldiers willingly follow men like that, men who demonstrate acts of self-sacrifice in the most harrowing of circumstances. How much more should we, as Christians, follow the One who endured suffering and death to rescue us from the most terrifying fate of all, an eternity in hell?

A good soldier is one who does not simply do minimum duty for his Lord, but rather is one who serves Him with everything he is and has.

That was the idea that entered Paul’s mind when, at the end of his own ministry, having been imprisoned by the emperor Nero, he wrote to encourage the young pastor Timothy. Timothy was facing severe conflict in his ministry at Ephesus, and the relentless opposition from heretics, apostates, and persecutors was weakening him. And just like any Christian who experiences difficulty because of following Christ, he needed to be reminded again of his task—to suffer hardship as a good soldier of Jesus Christ.

Paul wrote in 2 Timothy 2:3-4, “Suffer hardship with me, as a good soldier of Christ Jesus. No soldier in active service entangles himself in the affairs of everyday life, so that he may please the one who enlisted him as a soldier.” A good soldier is one who does not simply do minimum duty for his Lord, but rather is one who serves Him with everything he is and has. As a Christian, that’s what you are called to. Paul’s words to Timothy are your marching orders, too, as you strive to be a good soldier of Christ Jesus.

Three Marks of a Good Soldier of Christ

The first mark of a good soldier is the willingness to suffer hardship with the rest of the soldiers. “Suffer hardship” literally means to suffer evil or pain along with someone else. By adding “with me,” Paul assures Timothy that he hasn’t asked anything of him that he wasn’t willing to do. In fact, Paul was writing from a prison cell.

As a Christian in the Western world, I’d bet it is sometimes difficult for you to understand what serious spiritual warfare and suffering for Christ mean. Even though the secular environment in our society is increasingly hostile to Christianity, you are not faced with loss of job, imprisonment, or execution because of your faith. With few exceptions, being a Christian won’t keep you out of college or from getting a good job. But the more faithful you are as a Christian, the more Satan will put roadblocks, hardships, and rejection in the way, the more evident the spiritual warfare will become, and the more frequent and obvious the hardship will become.

You have been called to endure hardship, and every Christian who has gone before you has had his share. And although you haven’t yet shed blood for your faith (Hebrews 12:4), you will experience hardship as a Christian for your faithfulness—count on it. Jesus said, “If they persecuted Me, they will also persecute you” (John 15:20). But be encouraged for He also said, “In the world you have tribulation, but take courage; I have overcome the world” (John 16:33). Jesus is the perfect Commander who leads by example and will bring you to certain victory in the end.

Jesus is the perfect Commander who leads by example and will bring you to certain victory in the end.

Secondly, a good soldier is marked by his separation from the “normal” life. A “soldier in active service” does not have a 9 to 5 job, or even a long 60-70 hour work week. He is a soldier 24 hours a day, every day of the year. His body, his health, his skills, his time—all that he is—belongs to the military. Even when on leave, he is subject to recall at any time, without notice and for any reason. And whenever ordered into dangerous duty, he is expected to put his very life on the line without question or hesitation.

Consequently, he is separated from his normal environment, so that he will not “entangle himself in the affairs of everyday life.” Paul is not speaking about things that necessarily are wrong in themselves. It is not that you, as a Christian, should have no contact at all with your former friends and surroundings, but that you should never be caught up and enmeshed in them. Those things are irrelevant to your soldiering and are always subject to being relinquished.

You should never allow earthly matters to interfere with the fulfillment of your duty to the Lord. Temporal concerns and activities, innocent in themselves, have neutralized the effectiveness of many pastors, special ministries, and doctrinally sound churches. Though they once labored faithfully in the primary purpose of serving Jesus Christ to advance His kingdom against the forces of darkness, they have unwittingly taken themselves out of the battle.

Just as the dutiful soldier places his life willingly on the line in the service of his commander, so also will you, as a faithful Christian, willingly deny yourself, take up your cross, and follow Christ (Luke 9:23). And you will find yourself echoing Paul’s words: “I do not consider my life of any account as dear to myself, in order that I may finish my course, and the ministry which I received from the Lord Jesus” (Acts 20:24).

The final mark of a good soldier is a genuine desire to “please the one who enlisted him as a soldier.” The men who followed Lt. Winters through terrible conditions and battles in Europe did so willingly—he had earned their respect and affections. In an even greater way, the Lord deserves your honor, your affection, and your obedience for all He has done for you. His own courage on the battlefield is unparalleled. He stayed the course and went before you to win your freedom and eternal life. And now He seeks your loyal service in His army.

The Christian’s greatest desire is to please Christ, and his fondest hope is to be rewarded for faithful service, to hear his Master say, “Well done, good and faithful slave; you were faithful with a few things, I will put you in charge of many things, enter into the joy of your master” (Matthew 25:21).

With that hope in the forefront of your mind, let your life be animated and driven forward by your love for Jesus Christ. And make it your ambition, “whether at home or absent, to be pleasing to Him” (2 Corinthians 5:9)—He is your spiritual Commander-in-Chief.

This post first appeared on Preachers & Preaching, the blog of The Master’s Seminary.