Every Person in this Group was a Former Slave to Addiction 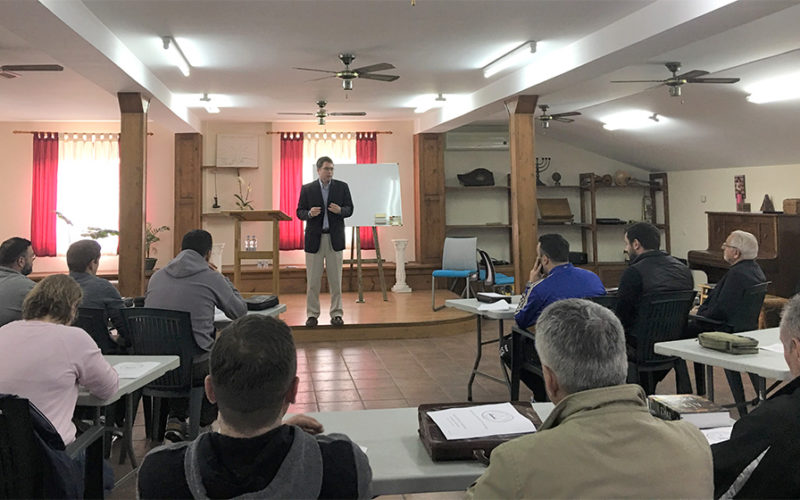 Dr. Kris Brackett was teaching a Bible-study methodology class via livestream for the Theological Biblical Academy when a Facebook comment caught his eye: “It is great to hear people discussing a grammatical-historical hermeneutic in Croatia.”

That’s not a common sentiment. Kris was intrigued.

The comment had come from a man named Vladimir, the leader of a drug rehab ministry in a nearby city. As it happened, Vladimir had already ordered several books from TBA, including multiple copies of John MacArthur’s commentary on the book of Hebrews and The MacArthur Bible Handbook. That was notable in itself; there’s not a huge market for such resources in Croatia. “For someone to buy five copies of one of our most expensive books? That draws our attention,” Kris explains.

Kris and Dr. Misko Horvatek, dean of TBA, decided to visit this Christian rehab center to find out more. They met with the leadership of the center, who described this self-sufficient community as a “fellowship.” To a degree, this fellowship functions a lot like a church. Having been freed from sins of alcohol or drug abuse, these ninety people—singles, young couples, and young families—are trying to live for the Lord and serve one another, as well as care for the new people who come to them for help escaping addiction. Eager to come alongside these brothers and sisters, TBA offered to serve in any way they could. Upon a suggestion from Misko that TBA could offer an on-site course in Bible Study Methodology, the leaders of the center enthusiastically accepted.

“They have a unique ministry opportunity,” says Kris, “and they’ve given us a great privilege to come in and teach them.”

But in contrast to Croatia’s general apathy towards intensive Bible study, “These guys are hungry,” Kris says about the believers at the rehab center. “They’re listening to solid stuff online, and they’re really engaged.

The leaders at the center all agreed: If they and their group were to keep growing spiritually, they needed some help and training. They were eager to improve the depth of their teaching and to work towards doing things biblically, not merely pragmatically. Shortly after that introductory visit, Kris returned and taught the center’s first class on Bible-study methodology.

“It was overwhelming to think that every single person in this group was a former slave to addiction,” Kris says, “but now are truly enjoying their freedom in Christ, having experienced the life-changing grace of salvation.”

The most exciting thing about teaching these men and women? “Their hunger,” Kris says. Many churches in Croatia don’t value qualified pastoral leadership, and there’s not a widespread demand for expository preaching. In fact, the students who come to be trained at TBA have demonstrated a truly rare conviction. When these students choose to pursue biblical studies, they don’t just face mockery from the world—they often face resistance even from their churches and believing families. But in contrast to Croatia’s general apathy towards intensive Bible study, “These guys are hungry,” Kris says about the believers at the rehab center. “They’re listening to solid stuff online, and they’re really engaged. So for my Bible-study methodology class, I’m just trying to help them read the Bible more carefully, more effectively, and introducing them to the principles of interpretation.”

And the response has been enthusiastic, to say the least. Kris lectured for no less than four hours that first session. But within a day, Kris says, “the people who weren’t able to be there because they were babysitting or on duty with the new patients—they’d already listened to the recordings of the lectures.”

What an exciting opportunity for ongoing ministry! There is a hunger for biblical truth in Croatia, and by God’s grace, TBA is primed and ready to meet that need—both now and in the future as they equip the next generation of church leaders to rightly handle the word of truth. For those of you who help support TMAI, thank you. Through your prayers and gifts, you are a part of the Lord’s provision for His children in Croatia who are hungering for His Word.