The Flesh is Weak, but the Spirit is Strong 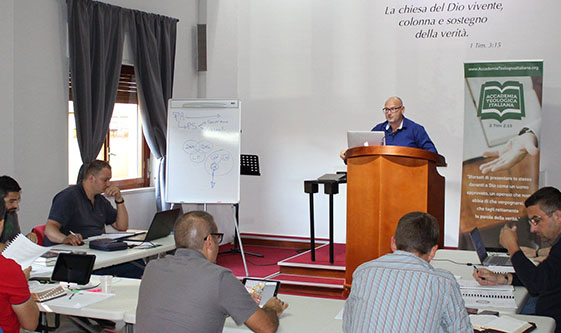 Almost a year ago, we told you about Gianluca Pollutri, a graduate of Italian Theological Academy (ITA—The Master’s Academy International’s member school in Italy). Upon graduating ITA, Gianluca and his wife, Sonia, traveled to the United States to continue his pastoral preparations at The Master’s Seminary. Gianluca’s goal was steadfast during his seminary training: to return to his homeland and preach the gospel to the people there, most of whom are part of the Roman Catholic Church.

Gianluca’s adjustment to American culture was a rocky one. On a sight-seeing drive up the California coast, he and his wife stopped to pick lemons from one of the many vineyards, a common act in his native Italy. The Vineyard keeper was kind to let Gianluca know that things were done a bit differently in America. It was the first of many adjustments Gianluca would have to make during his time in the United States.

Thankfully, Gianluca would adjust to life in a new country and excel in his training at The Master’s Seminary, keeping ever in front of him the goal of returning to his homeland to minister the gospel. Still, it wasn’t easy. Midway through his training, Gianluca was diagnosed with cancer, an illness he would fight as he continued his studies. He was determined to return and serve in Italy.

This past summer, Gianluca was blessed to return home, but he was also hit with another medical trial. He endured a virus for nearly four weeks, causing him severe pain and fever. Gianluca and his wife, Sonia, were blessed during this trial, though, as friends and fellow-believers came to support and care for them while they transitioned back to Italy. Not only did Gianluca recover; he was also able to see an oncologist in Italy and received a report showing that his cancer was still in remission. Though he felt the weakness of his flesh, his spirit remained strong and determined to preach gospel to his fellow Italians.

Though he felt the weakness of his flesh, his spirit remained strong and determined to preach gospel to his fellow Italians.

Never one to sit idly, Gianluca immediately got to work and began serving at ITA, by teaching an Old Testament survey class. He’s also been able to preach in local churches, and even proclaim the gospel at a family funeral. Gianluca and Sonia have also had the blessing of visiting other missionaries in the region and encouraging other ITA leaders.

Please continue to pray for Gianluca’s health and for his ministry in Italy. Many people consider Italy hopeless, so steeped in Roman Catholicism that ministry there is useless. Still, men like Gianluca and the team at Italian Theological Academy continue to serve and faithfully proclaim the gospel of grace alone to their homeland. Be praying for them!