From China to Germany: Tianyu’s Testimony 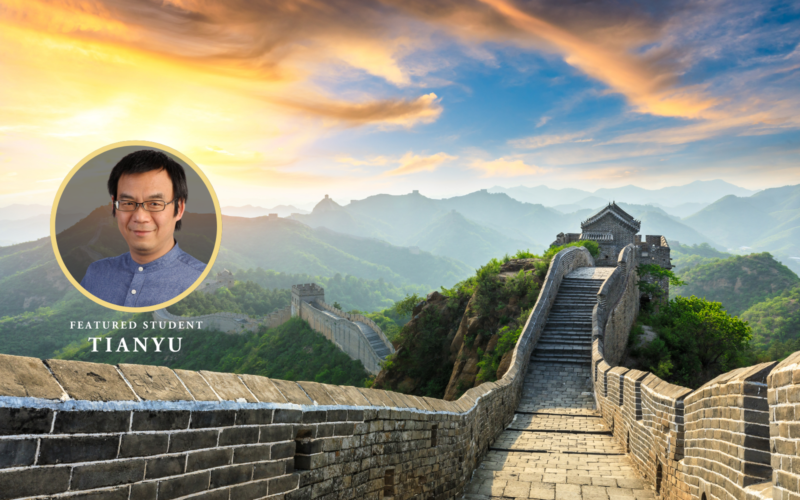 Born in China in the 1970s, Tianyu grew up heavily influenced by Marxism, Confucianism, Taoism, Buddhism, and other traditional folk beliefs. It wasn’t until the age of twenty-five, when he came to Germany to study, that he first came into contact with believers in Jesus Christ. As a result of those interactions, he began reading the Bible and going to small group meetings. Eventually, he came to faith in Christ when he realized that salvation is only by God’s grace—a free gift that cannot be earned by good works (Eph. 2:8–9).

Today, Tianyu serves at a Chinese-speaking church in Berlin. “At some point,” he says, “I realized that if I wanted to be more effective in my teaching, I needed a solid biblical foundation, so I signed up for this program at the European Bible Training Center.”  Scripture itself needs to be the foundation for the interpretation of any biblical text.

Tianyu chose to study at EBTC because he wanted to better serve and shepherd his local church—and he realized that rigorous, in-depth theological training would help him do just that. One of the most helpful things he’s learned so far? The principles of biblical interpretation: how to understand and apply a biblical text. “Rather than viewing Scripture through the lens of our personal experiences,” he explains, “Scripture itself needs to be the foundation for the interpretation of any biblical text.”

Please pray for Tianyu as he continues to pursue faithfulness in his full-time secular job, his studies at EBTC, and his responsibilities to his local church. Praise God for His guiding and provision in Tianyu’s life—and for the students like him at EBTC who are being equipped to rightly handle the word of truth.

We know you rejoice with us that the Lord is calling and preparing men like Tianyu to feed and shepherd His flock. If you’d like to help church leaders around the world receive training in the principles of biblical interpretation that Tianyu mentioned, supporting TMAI is one way to do that. Click here for more information on how you and your church can be part of this global training ministry.